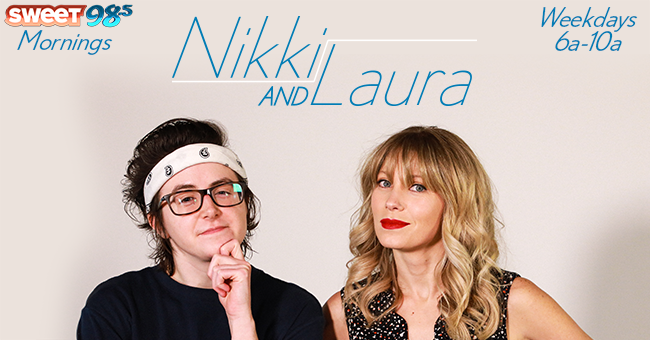 Wake up with Nikki and Laura weekday mornings from 6am – 10am!

Nikki Oswald grew up listening to Sweet 98.5 (it was a staple on her bus route), recording songs off the radio onto *cassettes* so she could pretend she was a real-life DJ. Being a part of this heritage station is a total dream come true.

When she’s not asking her daughter 47 times to find her shoes, trying to keep her toddler from biting, or dancing with the kids to Panic! At The Disco and Taylor Swift, she’s running, pinning recipes and home remodel projects she’ll never get to, quoting her 4 year old on Twitter, or singing far too loudly at a concert.

Originally from the Twin Cities area, Laura arrived in Omaha as a Creighton University student pursuing degrees in both Computer Science and Communication Studies. Laura has always had a passion for music and pop culture, which sparked her initial interest in radio.

When not in the studio, working out, or sleeping, Laura can be found taking pictures of her cat, listening to podcasts about The Bachelor franchise, or spending an obscene amount of time on Twitter. She enjoys attending concerts, obsessing over female pop stars, and memes. Laura considers one of her greatest achievements to be the time that she danced with Taylor Swift’s mom.